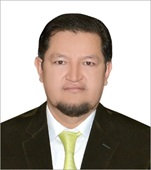 Dr. Hadi Hedayati associate professor was born in a family of intellectuals in Kabul city. He completed his elementary studies in Abdul Ali Mostaghni High School in 1996. Having successfully passed the National Entrance Exam, he continued his higher education at Science Faculty of Kabul University. In 2000, he obtained his BA degree and was later, selected as an academic member of the Science Faculty of the Kabul University.

Using a state-owned Scholarship, in 2012, Mr. Hedayati attended a Doctoral program at the University of Talen in the Estonia. After successfully completing his doctoral research, Dr. Hedayati returned to the country and according to the proposal NO (131) dated 5/1/2017 of ministry of communication and information technology and decree NO (3490) dated 5/1/2017 of the presidency of Islamic republic of Afghanistan he appointed as deputy admin and finance minister of MCIT Afghanistan

Dr. Hedayati after compiling of computer engineering book dated 7/6/2017 promoted to the rank of associate professor

During this period, in addition to his teaching job and academic researches, he has had technical and vocational engagement in various non-government projects, such as the UN, Japan’s JICA Business projects and etc.